Where Fellowship and Camaraderie lives: that place where the CPS membership values fun and good fellowship as the cement of the community
Post Reply
7 posts • Page 1 of 1

Seminarians from Barcelona say they were scandalized when Pope Francis reportedly used the f-word and other expletives at a papal audience in Rome.

According to testimonies from the seminarians, Francis ranted against “f***ing careerists who f*** up the lives of others.” The pope criticized “those who climb to show their a**,” the Italian media outlet Daily Compass reported on Monday.

The trainee priests were shocked when Francis also reportedly insisted that priests should never deny absolution to penitents in the confessional under any circumstances.

Eyewitnesses describe how the pontiff, at the audience on Dec. 10, tossed his prepared speech aside, saying that “it would have been boring.” Instead, Francis told the seminarians to ask him questions.

“After handing out the address prepared for the occasion, the pope engaged in dialogue with those present at the meeting,” the Holy See Press Office clarified.

It is not the first time this pope lost his cool in public.

Pope Francis slapped at a woman twice after she reached for him in St. Peter’s Square. It was a horrible display.

NOPE FROM THE POPE: While greeting people in St. Peter’s Square on New Year’s Eve, Pope Francis had to pull himself away from a woman who grabbed his hand and yanked him toward her. https://t.co/umkpOnbbX6 pic.twitter.com/0XzxtWTMUd

I came to Pope Slap and drop F-Bombs 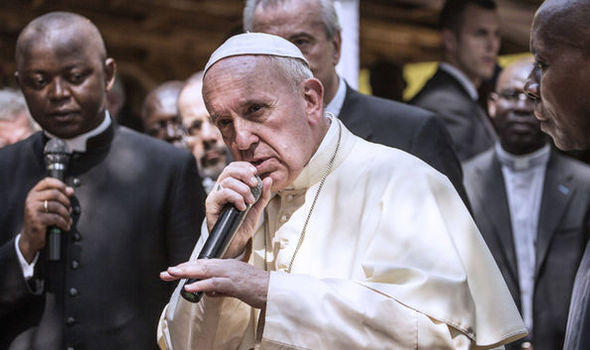 F-bombs aside.... Francis has consistently held that canon law should just be ignored whenever it is inconvenient. And the important thing is to make a person feel good, even if he or she is not actually in a state of grace.

Absolution doesn't forgive sins if the sinner isn't at least trying to quit living that sin. An alcoholic or addict who is struggling to live sober can be forgiven for slip-ups and encouraged to do the work, go to meetings, etc., with the promise that Christ's grace will help them reach the goal of sobriety. Come back to confession as often as you need to. Come when you don't.

Automatically giving absolution to hardened cases doesn't forgive anything, and the priest who fails to give true counsel (even when it is hard to say) will have to answer to God for this.
What part of "HOC EST ENIM CORPUS MEUM" do you not understand?
Top Canon Law has always been about the saving of souls, first and foremost.

Regarding the practice of the Church, it protects the teachings of Christ from those who would like to feel "saved" while continuing to enjoy their sins.
It also protects the liberty of Christians against the tyranny of bully bishops and popes and parishioners.

It's one thing to apply canon law "pastorally," as intended. It's another thing to disregard canon law as useless or irrelevant.

Pope Benedict warned us to resist the "tyranny of relativism."

I don't want to accuse Pope Francis based on a slanderous article from Church Militant, but there are times when Francis appears to urge us to embrace the relativism. And it's disconcerting.
What part of "HOC EST ENIM CORPUS MEUM" do you not understand?
Top

So what exactly did Francis say?
https://newdailycompass.com/en/francis- ... expletives
Top

His delivery would have been better if he wore a tux