Where Fellowship and Camaraderie lives: that place where the CPS membership values fun and good fellowship as the cement of the community
Post Reply
27 posts

The seat giving the Rs the house majority came from California.

That's very funny to me.

This is very good news
Top

Pelosi has stepped down from any further leadership--- not leaving congress.. just leadership. She said she has worked with 3 great presidents (going out of her way not to say the "T" word nor include him).

Someday the pettiness may end among our statesmen (and stateswomen) but not today.
Top

gaining_age wrote: ↑17 Nov 2022, 16:26 Pelosi has stepped down from any further leadership--- not leaving congress.. just leadership. She said she has worked with 3 great presidents (going out of her way not to say the "T" word nor include him).

Someday the pettiness may end among our statesmen (and stateswomen) but not today.

Pelosi's pettiness and bullying are not news. She's been a little napoleon for decades.
What part of "HOC EST ENIM CORPUS MEUM" do you not understand?
Top

Mr. Xi was not very pleased with Mr. T.

This has been a public service announcement. Thank you and resume your normal duties.
Here I stand. I can do no other.

This is so Canadian polite cute I can barely stand it.
Nothing destroys cowboy boots faster than mare's urine. - JimVH as published in Equine Quarterly September 2022
Top

I am attempted to discern if a topic I heard has merit in the truth department.

My google-fu appears weak on this.

Females are not allowed to attend the super soccer thing that is on-going since the time of this post.

Thanking you in advance for setting me straight. 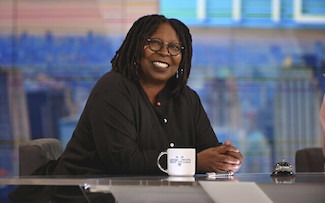 This image released by ABC shows co-host Whoopi Goldberg on the set of the daytime talk series "The View." (Jenny Anderson/ABC via AP)

In interview, ‘The View’ host labels Holocaust ‘white on white violence,’ echoing remarks made in January that led to her two-week suspension from US talk show.

US actress and producer Whoopi Goldberg once again claimed on Saturday that the Holocaust was not connected to race, less than a year after similar comments led to her two-week suspension as host of “The View.”

In an interview with The Sunday Times of London, Goldberg said that the Nazi-orchestrated genocide was “white on white” violence, and not about race.

When the interviewer noted that the Nazis viewed their victims as lesser races, Goldberg replied: “Yes, but that’s the killer, isn’t it?”

“The oppressor is telling you what you are,” she continued.” Why are you believing them? They’re Nazis. Why believe what they’re saying?”

Explaining that Jews are not identifiable as a race, she said: “It doesn’t change the fact that you could not tell a Jew on a street. You could find me. You couldn’t find them. That was the point I was making. But you would have thought that I’d taken a big old stinky dump on the table, butt naked.”

Goldberg was promoting her new film, Till, in which she plays the mother of civil rights activist Mamie Till-Mobley. The movie tells the true story of Till-Mobley’s quest for justice after her son, 14-year-old Emmett Till, was lynched by white supremacists in Mississippi in 1955.

Goldberg, born Caryn Elaine Johnson, has no Jewish ancestry but adopted her stage name to be deliberately Jewish-sounding, in part because she has said she personally identifies with Judaism. She told a London audience in 2016: “I just know I am Jewish. I practice nothing. I don’t go to temple, but I do remember the holidays.” In 2016, she designed a Hanukkah sweater for Lord & Taylor.

Whoopi doesn't know that that Nazi race theory had white Europeans subdivided into many races, They differed by eye and hair color, ratios of skulls and faces (round or angular), etc. Nazi school kids were educated in recognizing the various white-skinned races and judging them accordingly.

How Whoopi ever got a lead spot on an ABC News show.... defies explanation.
What part of "HOC EST ENIM CORPUS MEUM" do you not understand?
Top